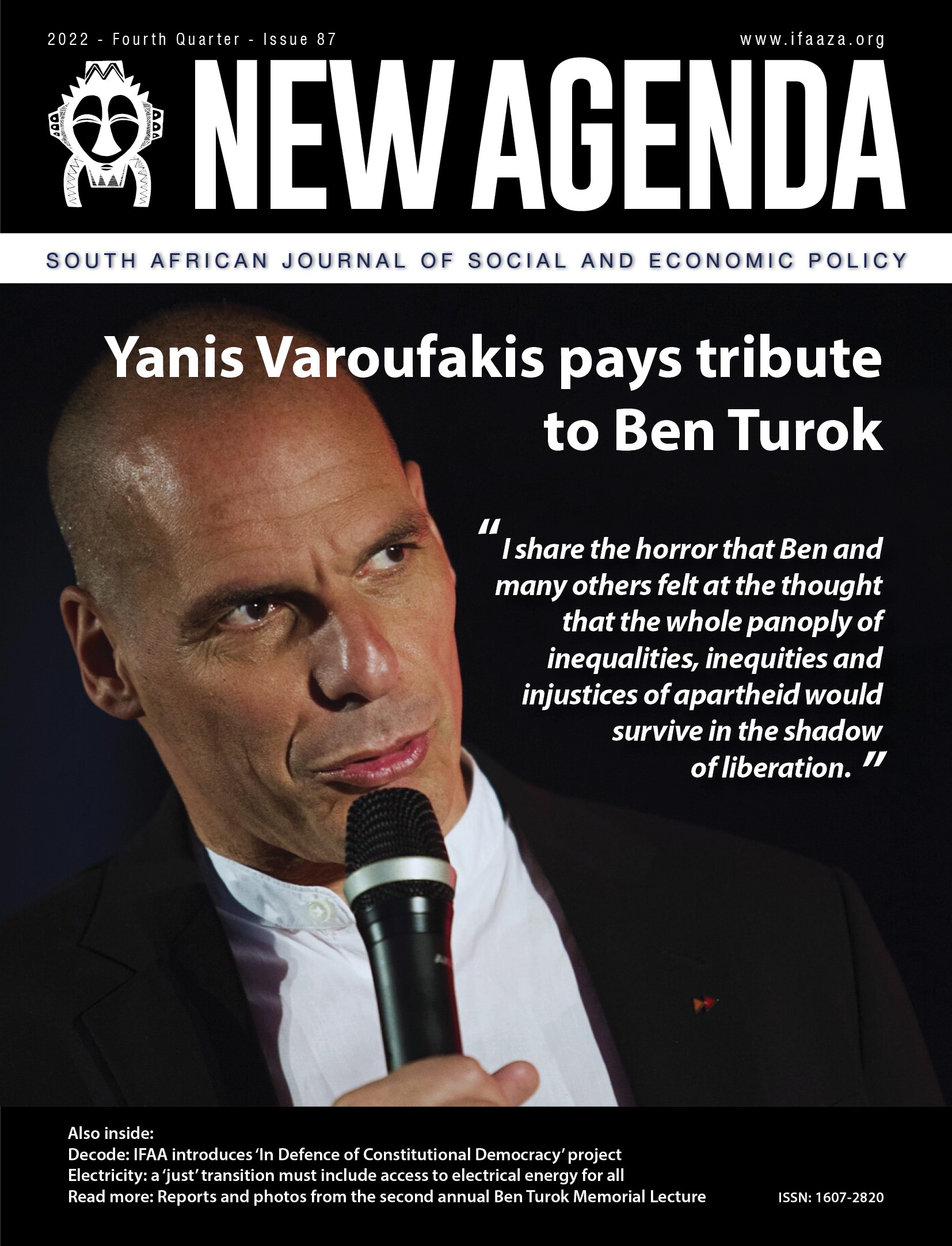 "I share the horror that Ben and
many others felt at the thought
that the whole panoply of
inequalities, inequities and
injustices of apartheid would
survive in the shadow
of liberation."

and a ruling party at sixes and sevens

It may seem appropriate that an inelegant and non-existent word – “permacrisis” – was chosen as the “word of the year” by Collins, the dictionary publishers. But in fact there is no need for a new, invented word to describe the state of the world as 2022 ends – and as South Africa anticipates the outcome of an ANC elective conference.

The old word is “unease” – reflecting a full mixture of anxiety combined with discontent – which perfectly sums up the current state of affairs, globally, but specifically for South Africa as we teeter along a knife edge. We await the outcome of this crucial moment in the life of the ruling party with anxiety, discontent and widespread disillusion, but also with anticipation. Because that is what South Africans do – they persist determinedly to hope and strive for transformation.

The elective conference comes at a time when party membership is down to 720,000, quite a fall from the 1.2 million member high-point reached in 2010.

Branch delegates make up 90% of the electors and I was invited to serve as the impartial and independent electoral officer for my local ANC branch – the branch of the late Ben Turok and Kader Asmal. The task was to elect the branch delegate and give them a mandate on who to vote for at the conference.

It was an enthusiastic gathering, swapping struggle stories as we waited for four hours to get the quorum of verified members before the meeting could begin. Each nomination was preceded by a motivation on why a comrade was suited to a position. This was done often with vigour and with humour, but always with serious intent. In past years, these meetings have been run by a regional official who clearly just wanted to get the voting done. We were lucky that the regional structures in the Western Cape had been disbanded due to in-fighting and disorganisation, so the branch arranged its own process. Nominations were not, of course, entirely open; nominees had to have been paid-up ANC members for at least five years.

All that notwithstanding, New Agenda wishes the ANC well for its conference, at which delegates representing 3,942 branches will choose the new 80-member National Executive Committee and the new Top Six (or perhaps Seven – a second deputy Secretary General may be added to the ANC suite).

NA87 was published soon after the conclusion of COP27. In this issue Roland Ngam writes about the need for a “just transition” away from fossil fuels and timeously looks back at the Just Energy Transition Partnership (JETP) between South Africa, France, Germany, the United Kingdom and the US forged at the time of COP26. A year ago this promised an initial amount of approximately $8.5billion (currently R140 billion) over the next three to five years. South Africa is wondering what has become of that offer.

Rich countries caused all the climate change problems and reaped all the benefits from fossil fuel combustion. Now they should pay for the poor countries to go green and renewable, and they must arrange compensation for the effects of the climate disasters which often affect the poor on the planet the most. At New Agenda, we are all for new, clean energy technologies. But we are conscious of a bigger picture where the desperate need is also for economic development.

The Economist of 5 November 2022 reports: “In the rich world the big energy challenge is how to make the supply cleaner. In Africa the problem is how to generate more energy. Average consumption per person in sub Saharan Africa, excluding South Africa, is a mere 185 kilowatt-hours (kWh) a year, compared with about 6,500kWh in Europe and 12,700kWh in America. An American fridge uses more electricity than a typical African person. Low energy use is a consequence of poverty; but it is also a cause of it. If Africa is to grow richer it will need to use a lot more energy, including fossil fuels.”

Also addressing the subject of a just transition and what is understood by the term, Viv Crone, in an article firmly based in the technical realities of power generation, argues strongly against a just transition that is only about renewable energy sources instead of broad development to achieve a better life for all.

We reprint an opinion piece about “illegal immigration” by Dave Lewis, originally published in Business Day. We have carried several article and statements in 2022 decrying xenophobia and pointing to the indefensible and repellent policies of the government. Lewis’ argument is that people should register and be recorded – but otherwise let be. “Drop the requirement for citizens of SADC states to apply for asylum seeker or refugee status. Instead incentivise all immigrants to pass through SA border posts, where their entry to the country can be documented.”

Mineworkers from Lesotho, Zimbabwe, Malawi and Lesotho – and other countries of the region – were allowed to vote in the first democratic elections in South Africa in 1994. This was in recognition of their role as members of our then great trade union movement in defeating the forces of apartheid oppression and racial discrimination. All forgotten or discounted.

Mugabe Ratshikuni introduces an unusual and engaging book on the Fallist Movement – in which participants and close observers write about their personal histories of their experience of student activism in the process of Chasing Freedom, which is the title of the book.

Ari Sitas reflects on the “Mandela Dividend”, the idea that the positive consequences of peace and reconciliation would far outweigh enmity. He wrote this before the memorandum of understanding between Denel, “our” arms manufacturer, and the murderous rulers of Saudi Arabia was brokered by President Cyril Ramaphosa in his October state visit to that country. Gone are the days when Kader Asmal chaired the committee that limited foreign arms sales to countries that had no need of them.

Finally, at this time of year, IFAA remembers its founder, the late activist and former MP, Ben Turok, who passed away on 9 December 2019. This year’s annual Ben Turok Memorial Lecture, held at Bertha House in Cape Town on 30 November 2022, was addressed by Yanis Varoufakis, the Greek politician, former Minister of Finance and international academic. This issue of New Agenda includes a number of reports from the memorial lecture and a feature on an art exhibition held at the event to commemorate Ben Turok. A transcription of the entire lecture can be found on pg 37.