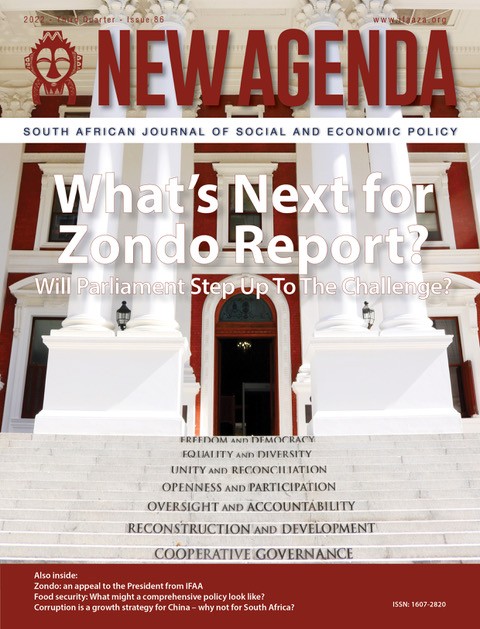 What's Next for Zondo Report?

Will Parliament Step Up To The Challenge?
You can also read:
Read Now
Lead Article

We can’t afford to ignore the Zondo Commission report

In this issue of New Agenda we focus on the final installment of the Zondo Commission report in which Chief Justice Raymond Zondo asserts unequivocally that state capture was the result of the failure of the Portfolio Committee system in Parliament to hold the executive to account. He makes it clear that fixing Parliament’s Portfolio Committee system is urgent and of the utmost importance.

IFAA believes this finding of the Zondo Commission into state capture is the most consequential of all its recommendations for the future of our democracy. So much so, that we publish in this issue of New Agenda a letter that we have sent to the President, appealing to him to intervene by calling on Committees to take Zondo’s words to heart and to read, if nothing else, pages 283-465 of Volume VI Part 2 on “Parliamentary Oversight”!

IFAA’s particular interest in the Zondo Commission’s report stems from a research project we began in 2019 called “Checks and Balances” that was initiated by IFAA’s founder, the late former MP, Professor Ben Turok, shortly before he passed away. It set out to examine why the checks and balances written into the South African Constitution have failed when it comes to acting on the recommendations of the Auditor General to reduce irregular, unauthorised and fruitless and wasteful expenditure in the public sector. We at IFAA have wasted long months since we released our research findings, before any Zondo reports, trying to get Parliament to engage fully with the recommendations and urgings of the Auditor-General, with no response.

We should be used to getting no response. We have had recommendations from Chapter Nine Institutions such as the AG; Commissions of Inquiry – outrageously expensive, long and drawn out, raising major issues of concern -- such as Truth and Reconciliation, Marikana, Baloyi, Life Esidimeni – and many reports on how Parliament could do better … and no action has been taken.

But we cannot afford to ignore the Zondo Commission report, not this time when the country is in crisis. State capture and corruption is one of the themes we pursue in this issue.

We consider the recommendations made by Zondo concerning Parliament and its failure to carry out its mandate to conduct oversight. We endorse a strong article from Corruption Watch which explains why the amnesty proposed for those fingered by Zondo as culpable in state capture is unlikely to deliver justice.

We present a provocative comparison between South Africa and China, where widespread, decentralised corruption and systematic looting of state-owned property actually reinforced rocketing economic growth. Author Ivor Chipkin does not ever endorse corruption – and we don’t forget that China’s significant growth had ugly downsides: environmental devastation, the depopulation of the countryside, a staggering gap between rich and poor and brutal internal repression. Chipkin reviews some of the evidence considered by the Zondo Commission and asks “Why did state capture not produce growth and development in South Africa like it has in China?”

A second emphasis in this issue deals with food insecurity – polite words for hunger, malnutrition and starvation – that is gripping the continent and threatening the livelihoods and lives of so many.

According to the Food and Agriculture Organisation (FAO), the specialised agency of the United Nations that leads international efforts to defeat hunger, the global prevalence of moderate or severe food insecurity has been on the rise since 2014. This is well before the shocks of COVID. Nearly one in three people in the world (2.37 billion) did not have access to adequate food in 2020 – with Africa as a whole being subject to the sharpest increases in the most extreme measures of food insecurity.

Sifiso Ntombela summarises practical measures to improve food security in Africa, even as climate challenges and the effects of the war in Ukraine compound the effects of existing bottlenecks in the continent’s food systems. One of his points – on the weaknesses in policy implementation – is illustrated by Jane Battersby who argues that in South Africa the national policy on food and nutrition is poorly framed. She gives examples of how emergent civil society networks are working to increase agency so that people are assisted to manage their diets. Mervyn Abrahams is the initiator of a monthly survey that tracks the impact of food prices on the poor in various towns and cities of South Africa. He describes current household food insecurity as a crisis that requires change at the level of political economic transformation.