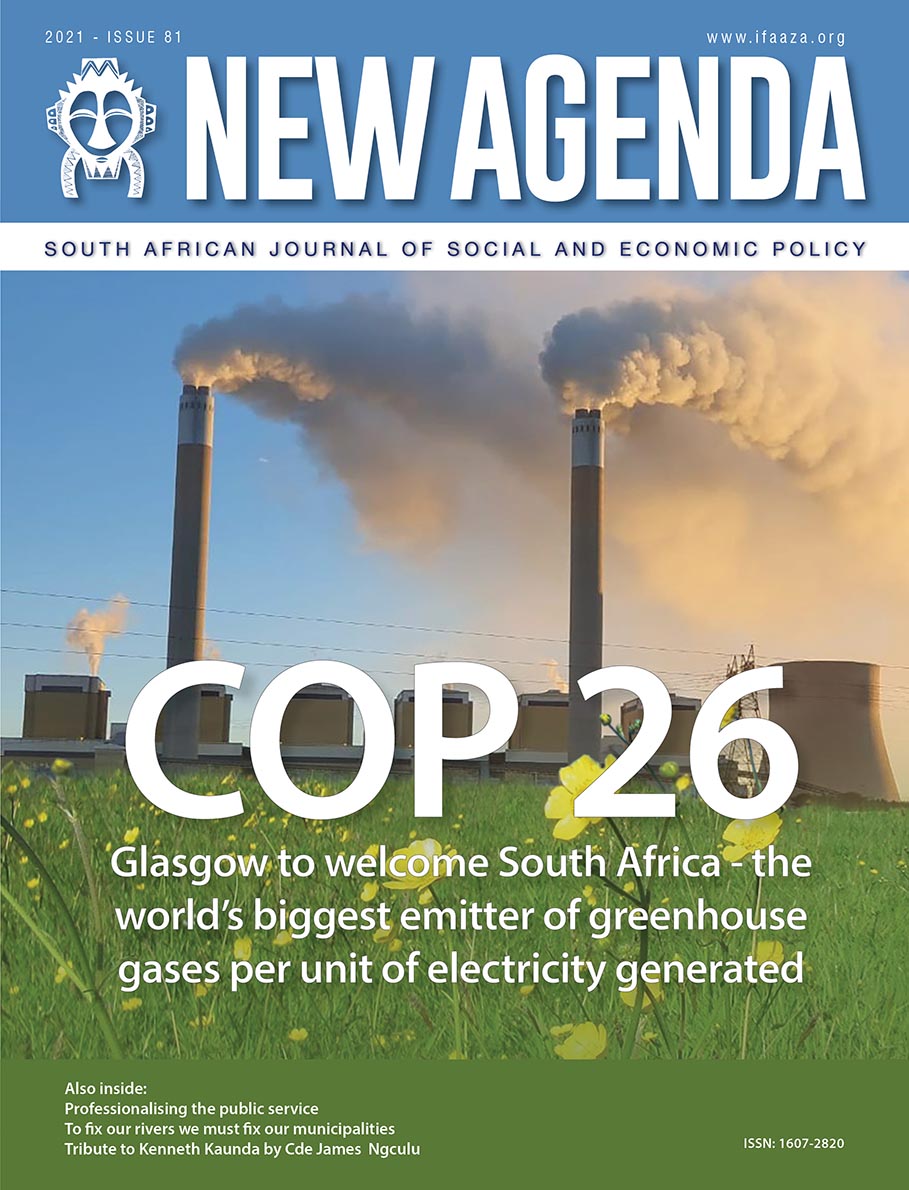 The world's biggest emitter of greenhouse gases per unit of electricity generated
You can also read:
Read Now
Key Article

Dr Nicol is the guest editor of the Institute for African Alternative’s flagship magazine, New Agenda, and the senior researcher on IFAA’s Checks and Balances Project. With a background in trade unionism and political activism, he retired from the research unit of the South African Parliament in 2019.

South Africa will go to COP26 in November with new targets for reducing its emissions of carbon dioxide and other greenhouse gases. But it is going to be very difficult to achieve these goals – even as they are criticised by environmental groups for being inadequate. A ‘just transition’ to a zero-carbon world is the broadly accepted aim: but as MARTIN NICOL makes clear, its elusiveness is right up there with unemployment, poverty, corruption, inequality and gender-based violence.

South Africa is one of the world’s biggest per capita greenhouse gas emitters.1 Greenhouse gases are released by all sorts of human activity, but particularly when beneficiating coal – turning it into liquid fuel or gas (as at Sasol) or converting it into electrical energy (as at Eskom).

In 2015, South Africa joined many other nations in signing ‘the Paris Agreement’, which was premised on the notion that if all countries work together to cut greenhouse gas emissions, they can reduce the risks and impacts of climate change. The air and the oceans are shared by everyone, so all countries need to be involved. The Paris Agreement required all countries to make commitments on how they would monitor and manage their greenhouse gas emissions. The long-term temperature goal is to keep the increase in global average temperature to below 2°C above pre-industrial levels and to pursue efforts to limit the increase to 1.5°C.

However, these commitments made in Paris, according to climate scientists, were not large or swift enough to reach either of these targets. In 2021, the signatories are meeting in Glasgow, Scotland in November to make new emission commitments – delayed a year because of the Covid-19 pandemic. The hope is that these new measures will be better tailored to make the Paris temperature goals viable.

Countries are taking a range of steps to reduce greenhouse gas emissions. Some countries (including South Africa) favour a ‘carbon tax’ to increase the cost of emitting greenhouse gases and to encourage businesses to emit less by increasing efficiency or shifting to new technologies – like solar or wind power. South Africa has also taken direct action to regulate emissions from electricity generation and from Sasol – although the government has been notably lax in enforcing legislated emission standards. Consumers are encouraged to reduce our ‘carbon footprint’ by reducing unnecessary air and car journeys and recycling.

South Africa has been fully involved in world research and discussions on the climate for many years. The country ‘punches above its weight’ in contributing to scientific investigations on climate change. In 2021, Parliament is scheduled to pass a ‘climate change act’ to bring all South Africa’s climate interventions under one umbrella.

Unfortunately, South Africa also punches far above its weight as one of the world’s biggest per capita greenhouse gas emitters. The main reason for this is our heavy reliance on coal and oil for our energy needs, and on industries that are particularly energy intensive, such as mining, smelting, cement and petro-chemicals. The entire modern economic history of South Africa has been built on energy from fossil fuels.