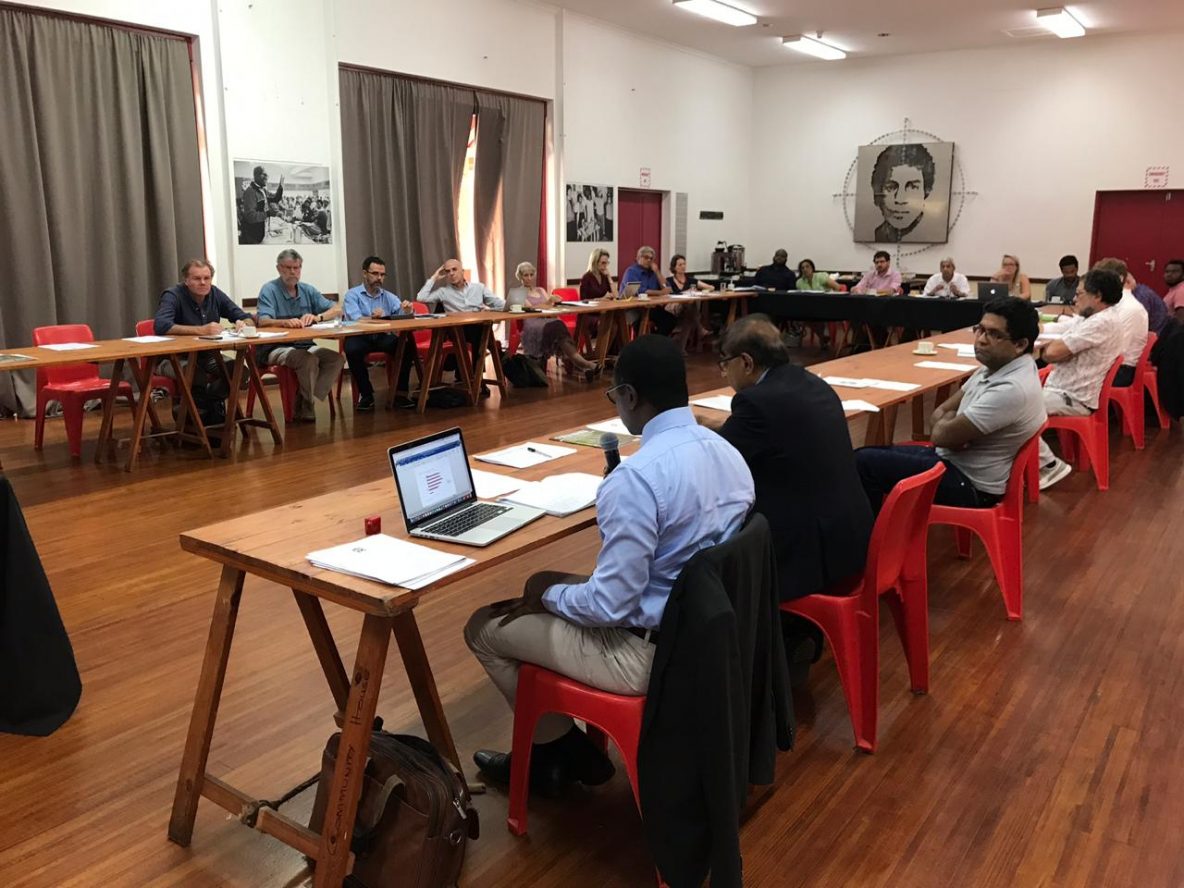 The Institute for African Alternatives (IFAA) recently brought together some of South Africa’s leading progressive economists to discuss the country’s seriously weak economy. This emerged out of concern about the narrow scope of the Presidency’s international investment drive and a recognition that this does not provide the answer to the country’s urgent need for reform in economic policy. What follows is a report on a productive and robust discussion.

President Ramaphosa’s call to South Africans to get behind the New Dawn and Thuma Mina campaigns has lifted some of the pessimism that has engulfed the country over the past few years. Business confidence levels have risen slightly since he took over the helm from Jacob Zuma. The ruling party, the ANC, appears to be holding on to its lead over other parties as we head into elections. The real work of transforming the economy, however, has yet to begin. The President’s investment drive may be bearing some fruit but that is not the panacea to the country’s economic woes. What advice could we give him about what could stimulate the renewal of our economy?

IFAA invited a group of progressive economists and other researchers from our universities, civil society and policymakers to give us their thoughts.

To kick start the seminar, Prof Ben Turok, the Director of IFAA, introduced two economists to present an overview of the South African economy and to offer some analysis of the causes of its decline. The first of the two main speakers identified two major causes of the decline: gradual de-industrialization over a 25 year period and the emergence of financialisation as a magnet for investment which has had a serious negative effect on the flow into the production of goods and services. This explains the low levels of fixed investment, limited structural transformation, weak export performance and the low contribution of manufacturing to GDP. As a consequence, employment levels have declined with very few new entrants being absorbed into the labour market. The effect, in turn, is a fall in aggregate demand and, with the high levels of unemployment, households have been unable to afford municipal services.

The dominant narrative for overcoming these conditions is that by dealing with state capture, re-structuring SOEs, lowering the budget deficit, lowering inflation and social expenditure and some minor micro-economic reforms, investor confidence and growth will rise. This economist argued that while some of these prescriptions may be necessary, they are similar to the GEAR policy adopted in 1996 which did not generate an increase in fixed investment. A result of this policy is that the country remains a net importer of goods and a net exporter of capital. Bleak as the situation may appear, he said that there was reason for us not to feel completely hopeless. Eskom’s debt and the wage bill are extremely high but the debt to GDP ratio puts us at the median level and government debt is largely Rand denominated, which limits our risk compared to other middle-income countries. To start fixing the economy he proposed we do the following:

The second main speaker noted that we had reasonable growth for the first 15 years after the transition. Since the international financial crisis of 2008, however, growth has suffered severely. More than twice the number of people were added to the ranks of the unemployed over a 10 year period. In response to some analysts who hold that this is because of rising wages, he presented a graph to show that the wages and productivity lines move together. He also pointed out that union density in the private sector is not that high.

The mismatch in skills may partly explain the lack of growth but he is more persuaded that it is the falling ratio of capital stock to GDP that is a better explanation. Growth without employment will not help South Africa. He made a strong case for labour intensive growth noting that this has been small in most of the sectors of the economy with construction and agriculture being the exception. In an export driven growth strategy, we should bear in mind that wages are generally higher which is not matched by our productivity. The turmoil in international trade is another factor to consider.

As for possible solutions, he recommended we look at:

In the discussion that followed the presentations of the two main speakers, issues of Reserve Bank policy were raised. There is a view that SARB decides interest rates on its own with hikes being introduced before we reached the 6% inflation target level. There was robust debate on the independence of the SARB with one participant asserting that there was no truly independent reserve bank and that what we should be seeking to establish is an autonomous reserve bank.

The collapse of labour-intensive manufacturing was also mentioned is a major concern and any growth strategy will have to include a mix of labour-intensive production, exports and foreign and domestic investment. A number of other middle-income countries have done much better in this regard.

There was concern that while we see fiscal space to raise the level of growth we are not tackling the massive environmental crisis that threatens the planet. Increased automation (the 4th Industrial Revoultion) must also form part of the policy proposals for economic renewal. For example, when we call for larger fixed investment, does this include automation?

Questions were raised about binding constraints on growth. Education was identified as one such constraint. Can this be fixed in the short to medium term? It can’t be divorced from the broader transformation of South African society. The minimum wage is another possible issue.

On the political front, one participant said we need to consider what impact the tightly contested race within the ruling party is having on policy making. He felt the lack of coherence within the ANC and the deal-making that results from seeking to satisfy the different factions, influences which policies get adopted. This could change with the possibility of coalitions being formed after the national elections.

On the adoption of policies, another view was that there were a number of policies that were implemented that have caused major problems. On implementation, another participant felt that we could only succeed if there was state capacity to do this. Without proper monitoring, we would remain far behind countries such as Korea. Cooperation between state departments is limited and inefficient.

A caution was also sounded about the relationship between high profitability and growth, of which South Africa’s has been a classic case. Many functions of the state have been outsourced to market related entities. An institution such as the PIC should be studied regarding investments made in non-productive industries. The design of state departments is another area for reflection: what do they say about the sociological and behavioural problems in our society.

We should be clear about what makes our GDP grow. Data will show that it comes from finance and services. The latter is linked to the short-term capital flows that we have.

The investment narrative has to be questioned: not investing in South Africa is seen as an advantage of pension funds. Rather than be focused on the next quarter, we should be talking about the next quarter century. We need a narrative that covers investment in fixed capital, infrastructure, production capacity, education and other social sectors.

Other issues that were raised dealt with industrial policy (do we have one when so little of the budget goes to DTI; the informal sector (SAs is small compared to countries similar in size with 800,000 people employed by informal sector entities); the lack of analysis on the investment ratios to profit, remuneration and retained earnings.

The two main speakers responded to these issues and in the course of the discussion that followed, the following key points were made:

There was broad consensus that South Africa is facing the “perfect storm” of high inequality, unemployment and deepening poverty alongside state incapacity and private and public sector corruption. In this context it is vital that a new and progressive macroeconomic and industrial policy be developed and implemented with speed. Those policies must guarantee the structural transformation of the South African economy through increased investment in labour intensive sectors coupled with strong redistributive mechanisms.

IFAA offered to disseminate these ideas widely through New Agenda and other publications. The aim is to make the recommendations a point for discussion across the political spectrum, among various social formations and business associations. The seminar ended with agreement to hold further rounds of discussions and to make it a platform for engaging key government representatives.

A full report on the seminar can be made available on request. Please contact admin@ifaaza.org.

We thank the Royal Netherlands Embassy for the generous funding for this event.