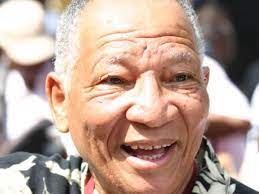 Born in Western Native Township (now Westbury), Johannesburg, Mattera grew up in Sophiatown, at that time a vibrant centre of South African culture, but later destroyed under the Apartheid regime. His diverse heritage was derived from his Italian grandfather, Xhosa grandmother, and Tswana mother.

In his autobiography Memory Is the Weapon he writes: “Sophiatown also had its beauty; picturesque and intimate like most ghettoes…. Mansions and quaint cottages … stood side by side with rusty wood-and-iron shacks, locked in a fraternal embrace of filth and felony…. The rich and the poor, the exploiters and the exploited, all knitted together in a colourful fabric that ignored race or class structures.” This “multiracial fabric” did not conform to the separatist policies of apartheid and so the suburb was destroyed and the people forcibly removed.

As a result of his political activities, he was banned from 1973 to 1982 and spent three years under house arrest. He was detained, his house was raided, and he was tortured more than once. During this time, he became a founding member of the Black Consciousness Movement and helped form the Union of Black Journalists as well as the Congress of South African Writers. He also joined the National Forum, which was against what it referred to as the “racial exclusivity” of the United Democratic Front.[5]

Mattera was awarded the National Order of the Baobab in Gold in 2006 for his excellent contribution to literature, achievement in the field of journalism, and striving for democracy and justice in South Africa.

In a tribute statement South African President Ramaphosa said “As a nation, we are saddened by the loss of Don Mattera’s eloquent, rousing and revolutionary voice for justice. May his soul rest in peace as, in his own prose, he sleeps the sleep of freedom.”

‘Remember to call at my grave

That I may rise

And when my eyes have filled their sight

Do not run away for fright

If I crumble to dust again

It will only be the bliss

Of a long-awaited dream

That bids me rest

When freedom finally walks the land…’