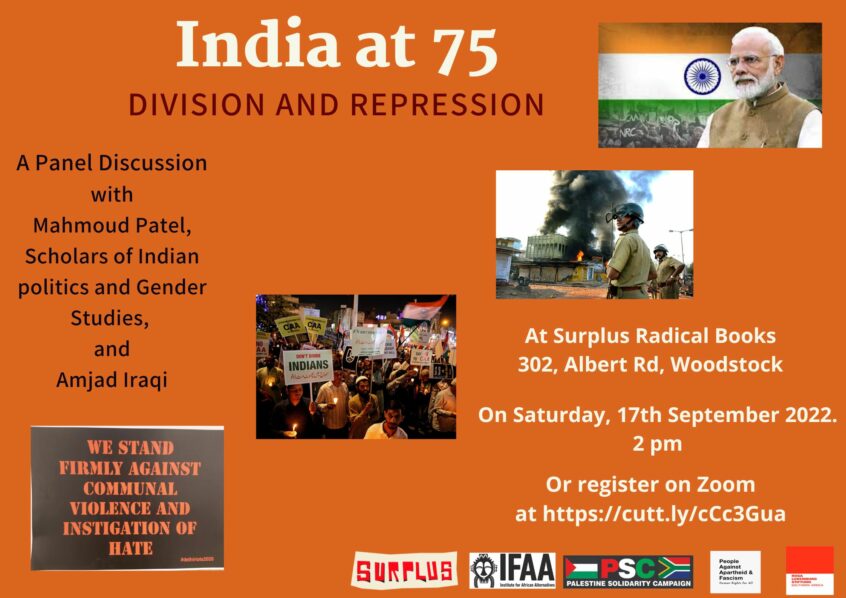 India at 75: Division and Repression

Surplus Radical Books and The Institute for African Alternatives, invite you to this critical discussion that seeks to unpack the unfolding of the current social and political crisis in India as this vast and strategic country celebrates its 75th year of independence.

Seventy-five years ago, as India obtained independence from colonial rule, it was also partitioned along religious lines. The partition displaced twelve million people; one million people died; and, some 75,000 women were raped and abducted. India today is being split from within by those who speak in the name of Hindu nationalism, its majority religion, and its majority population. Organized purveyors of hate and violence inside and outside the state believe that the business of partition remains unfinished. How do we understand their emergence? Where might this division and repression take the Indian subcontinent?

This hybrid event will take the form of a panel discussion featuring Mahmoud Patel, a legal scholar, and human rights activist, based at the University of the Western Cape, and two other scholars of Indian Politics and Gender Studies. Also joining the panel will be a special guest from Palestine, Amjad Iraqi who will give an input on the parallels between the Indian crisis and occupied Palestine today.

Please join us in person on Saturday, 17th September 2022 at our exciting venue Surplus Radical Books, 302 Albert Road Woodstock, at 2 pm. You can also register to attend on Zoom at https://cutt.ly/cCc3Gua.