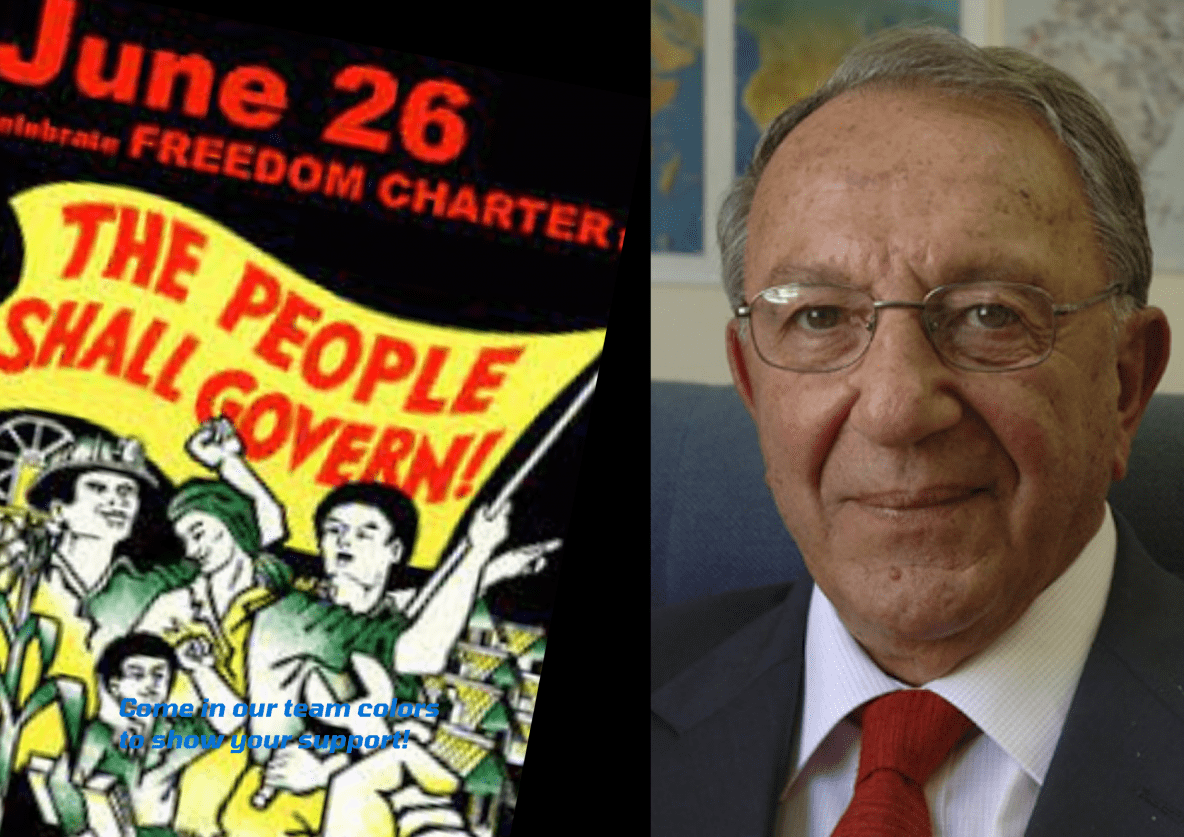 Today (26 June) South Africa marks the 66th anniversary of the Congress of the People where thousands gathered to endorse the Freedom Charter. But it is of particular significance to those who also remember the man who wrote its economic clauses, the late Professor Ben Turok, whose birthday happens to fall on the very same day.

As the Freedom Charter, which underpins much of South Africa’s Constitution, enters its 67th year, Turok, who passed away on 9 December 2019, would have turned 94 today.

Staff of the organisation that he founded in 1986, the Institute for African Alternatives (IFAA), remember Turok on this day with special respect and fondness. They note his struggle for justice and an end to apartheid, a commitment that lasted more than 70 years, and kept him working at it until only days before he died.

The IFAA team marks the anniversary of the launch of the Freedom Charter an proposes a digital toast to our founding director and editor of its flagship journal, New Agenda.  The staff fondly remember often being  treated to his reminiscing about his years in jail and later in exile. Under his leadership they engaged with radical economics that promoted social and political policy based on the rights set out in our Constitution.

During his twenties he was a full-time ANC organiser for the Western Cape and part of his job was collecting demands to be taken to the Congress of the People. He has recalled receiving a letter from the National Action Council organising the Kliptown congress requesting him to comment on the economic clauses in the Charter.

Years later, he was quoted saying, “I nearly died of fright at the prospect. But I went to up Kliptown with others and there were thousands of people. I was called upon to speak but the night before the Congress of the People, the speakers were summoned to a meeting and given a draft Freedom Charter.”

He often publicly recalled that he was unhappy with the initial details in the economic clause of the Charter which he felt were too moderate. Fearful or not, he spoke out and was told that he should rewrite the clause there and then. He was then only turning 30. But that task placed him among those who wrote the words we recall today: “The people shall share in the country’s wealth; The national wealth of our country, the heritage of all South Africans, shall be restored to the people; The mineral wealth beneath the soil, the banks and monopoly industry shall be transferred to the ownership of the people as a whole.”

Speaking out was characteristic of Ben Turok and over his 70 years of struggle that was what he became known for, so that at his passing many tributes referred to his unyielding integrity and his unqualified determination to never fear speaking truth to power.

Only months before his death he wrote: “When the ANC talks about ‘nationalisation’ it is necessary to return to exactly what was said in the economic clause of the Freedom Charter. What was meant had nothing to do with seizure of resources. It was all about sharing and recovery of resources that were lost due to colonial expropriation.”

IFAA was founded in London in 1986 by Ben who mobilised other political economists from across Africa, including Prof Abdoulaye Bathily of Senegal, Sheperd Nzombe from Zimbabwe, Prof Mahomed Suleiman from Sudan, Prof Bade Onimode from Nigeria and Prof Haroub Othman who was from Tanzania. They first came together to speak out about the decline of Africa caused by harsh policies imposed by the likes of the Bretton Woods institutions.

IFAA’s approach to development achieved considerable prominence. At its height, IFAA had centres in six African countries and the institute cooperated with the United Nations Economic Commission for Africa and the Organisation of African Unity (OAU).

Prof Turok re-established IFAA on his return to South Africa from exile, first in Johannesburg and later in Cape Town, where he served as a member of parliament until he retired in 2014. The staff of IFAA and its Board, chaired by former president Kgalema Motlanthe, have committed themselves to continuing his work subsequent to his death. IFAA currently runs a number of projects that engage with economic turnaround and the consequences of poor governance.