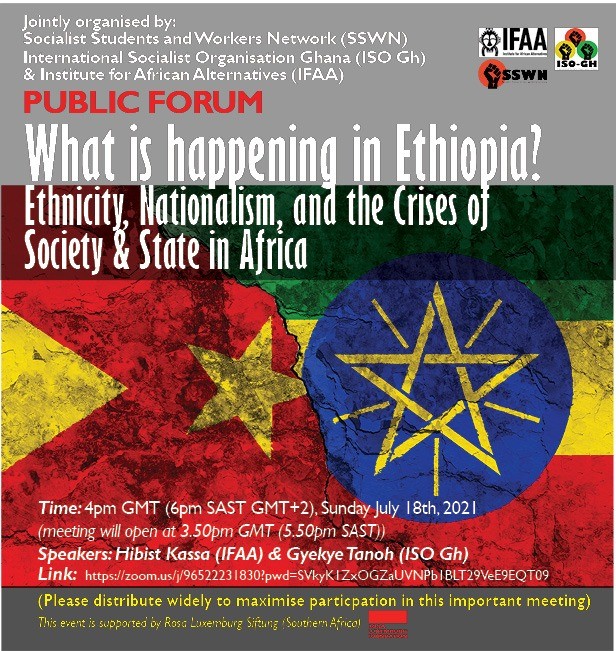 What is happening in Ethiopia? Ethnicity, Nationalism and the Crises of Society and State in Africa

In the early 1990s, a wave of democratisation ended dictatorships and led to transitions to electoral democracies on the continent. In Ethiopia, a civil war ended with the fall of the military regime, the Derg, and the entry of the Tigrayan Peoples Liberation Front (TPLF)-dominated coalition government. Around the same time that the formal end of apartheid in South Africa was being negotiated by the African National Congress (ANC) and resulted in the establishment of one of the most progressive constitutions in the world.

Both regimes have been backed geopolitically by the United States and its allies, with South Africa becoming a centre not only for mining and manufacturing corporations but also for finance capital in Africa. While the TPLF was devoutly ethno-nationalist, and advancing its version of the developmental state, it also implemented some degree of liberalisation. On the other hand, the ANC affirmed a non-racialist path in nation building while also self-imposing structural adjustment. In more recently years it has become even harsher in its imposition of austerity in the most unequal country in the world.

In this time of global economic, climate and energy crises, and in the midst of a pandemic, that has exacerbated inequality and poverty, both countries have also had severe splits amongst their ruling classes. These amplified tensions along ethnic and racial lines and ignited violent conflict. Taking Ethiopia, as the historical name of Africa in the classical traditions of the 19th century, this public forum seeks to analyse the roots of the crises facing these two countries in Africa after the respective ends of military and racial minority dictatorships. By posing the question: What is happening in Ethiopia? We examine the nature of the State and Social Crises in Africa.

Join our Cloud HD Video Meeting at the following link