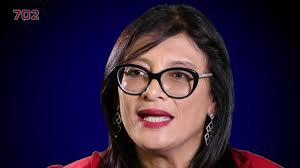 At a debate on the media organised by the Institute for African Alternatives (IFAA), veteran journalist Karima Brown, who sadly passed away on Thursday, 4 March 2021, warned that we have a media environment that is no longer trusted by the public; that social media has created a crisis because citizens can no longer distinguish between the truth and a lie. In honour of her memory, we post the transcript of her presentation below, which we featured in New Agenda 75.

The model for news as a business is broken and there is no silver bullet that can fix it. I have been in discussions from Russia to the Netherlands the UK, the US and Switzerland, and no one can figure out how to make this industry profitable. Ultimately, that is the inevitable outcome of capital and the reason why people who own news outlets have changed.

While there is a crisis about ownership in the media and people are trying out various models, in my experience the media and are united around two things: It is no longer about making money because it is no longer possible to make money using media. It is about buying influence, in particular influence over the policy decisions of a government.

A similar model is employed in India where people essentially buy face time to help their rise to power and challenge their detractors. Iqbal [Surve’s] newspapers are a good example of that model.

I have worked in the public space at the SABC for nine years, and I have worked at almost every media house in this country except Naspers/Media 24. I also launched Forbes Women Africa, the first stand-alone Forbes magazine dedicated to women on the continent.

When I worked at the SABC, I was lucky to come in on the cusp of the glory days, if you like, where the SABC had just been opened and there was a space where we could actually engage with each other. But then I had the misfortune to be banned from speaking by the former managing director of news and current affairs at the SABC.

When I left the SABC to go to the private sector, a colleague ‑ who had left the private sector to go the SABC ‑ said to me, “Don’t think it’s any different out there”. When I was the political editor at Business Day, my editors decided that I could no longer be a columnist.

I believe my column was profitable because we weren’t hunting with the rest of the pack. At that stage we were tracking, in granular detail, Jacob Zuma’s path to power. At that time no-one wanted to believe it. But we were proven right in 2007 when Zuma didn’t only win, but he also annihilated a particular way in which people understand the ANC. He also set in motion the state capture project from which we are now trying to recover.

What is the effect of journalism? We live in one of the most unequal societies in the world, so the need for journalism is huge, despite the fact that it operates within the context of a broken news model.

Journalists are not homogenous. We are not all united. We don’t all share the same world views. In fact, some of us try to hide that and say that objectivity exists. I believe that is complete horse shit. In my view, there is no such thing as objectivity. The best one can hope for is balance, fairness, accuracy and context.

It is also important to consider the fuss around social media. I’m not on Twitter because I think its a place for sadists. It’s certainly not a place for engagement and it is not a democratic space.

More importantly, in the age of the creation of automated bots, it presents a huge threat. It assists what Noam Chomsky refers to as manufactured consent around the issues, and we see political parties, political elites and business elites making effective use of that.

The Guptas used it with Bell Pottinger and the EFF is probably now the party that makes the most use of Twitter as a weapon. Of course, there is the so called ‘black twitter’ that, in my view, delegitimises any argument that doesn’t correlate with the futility of identitarian politics in some ways and delegitimises voices.

I don’t see Twitter as a democratic space. I see it as a place to do something far more harmful that will be in the interest of the elites. This, in turn, helps to create an atmosphere where citizens cannot tell truth from a lie.

For me, that is the most serious threat to the quality of the democracy that we have created. The chasm between what people read, watch, listen to, consume and distribute, and what is actually real, is huge, which creates a massive problem. I would say it is the biggest problem we have at the moment.

For example, the EFF recently put out bots that suggest that certain judges whose rulings the party disagree with are bought. During women’s month, for example, we had two women judges ruling against the EFF in cases in which the party was involved. The first woman was a white judge so she was disregarded as a racist; the second was a black judge who had apparent difficulty reading her judgment in English. She was considered illiterate and it was alleged that she didn’t write her own judgment.

There was no critique of the EFF from the media because every one of its press conferences is turned into a mass meeting. Journalists become cheerleaders, hanging on to every word that Julius Malema says because he dished the dirt on Jacob Zuma. Many people have written books based on Malema as their source. He then turned on them and he called them “little white boys” … and now all hell has broken loose.

Going back to the question of objectivity, in other countries the tradition is for newspaper houses to identify with one or other world view. In the UK, for example, people who read the

Guardian, even if they oppose Jeremy Corbyn, are generally considered to be close to the Labour Party. If you read the Telegraph, you know you are reading a Tory perspective.

Here in South Africa, there is an active dislike of that kind of journalism. If I take sides I am often accused of being a politician and not a journalist. My answer is that, if I am a political journalist and I don’t have politics, then I am not worth my salt; I should not be covering politics.

It is a statement with which I completely concur. I take a position on state capture. I took a side against mainstream media that didn’t give the democratic government a fair shake. I take sides on the fact that there is growing fascism in the so-called constitutional politics that we have, and that is being demonstrated by the EFF. Unlike my colleagues, I don’t pander to their nonsense. As a result, I was harassed and threatened but was also the first journalist to take such matters to court.

I take sides and I own my politics. And I think that there is no contradiction between having political convictions and being a journalist. This is something South African journalists need to wrestle with.

We all have agendas and we cannot forget that. Because we are allowed to present ourselves as if we live in a vacuum outside of the contestations that are happening in society does not make that reality.

I am a Marxist and I have caught a lot of flak for supporting the struggle of workers. But I don’t care.

What I find really scary is the fact that we have a media environment that is no longer trusted by the public; that we have social media — Twitter and the rest — that is infiltrated by individuals who sit somewhere in a room and send out messages that create potential havoc.

This is a crisis — and a crisis for journalism. It is a crisis fuelled by elites across economic and political lines who are essentially trying to create an atmosphere where citizens cannot distinguish between the truth and a lie. The fight to distinguish truth — verifiable fact — from lies is supposed to be the journalists’ fight.