In 2017, Jedidiah Purdy wrote that, “systems of profit and violence, inequality and vulnerability, have gone global, and fights against them must as well” (Walzer et al., 2017). His is one of many calls for a renewed, progressive internationalism, the most prominent of which is the recently launched, Progressive International (PI). The PI is spearheaded by US Senator Bernie Sanders, Jane Sanders and former Greek Finance Minister, Yanis Varoufakis and aims to unite individuals and organisations globally to fight “to end inequality, exploitation, discrimination and environmental degradation.”[1] As globalised capitalism drives increasing inequality, the crises – economic, political and, above all, environmental – loom larger than ever. The cross-border solidarities that the PI aims to build are a crucial counterweight to this.

In a 2018 Guardian column, Sanders, who recently announced his intention to run again for president in 2020, wrote that we are facing an “authoritarian axis”, united by religious and ethnic intolerance, hostility to democracy and the media and support for policies that advance only narrow economic interests. This axis includes the likes of Bolsonaro, Trump, Erdogan, Duterte, and many others (Sanders, 2018). He adds, “these leaders are also deeply connected to a network of multi-billionaire oligarchs who see the world as their economic plaything” (Ibid). 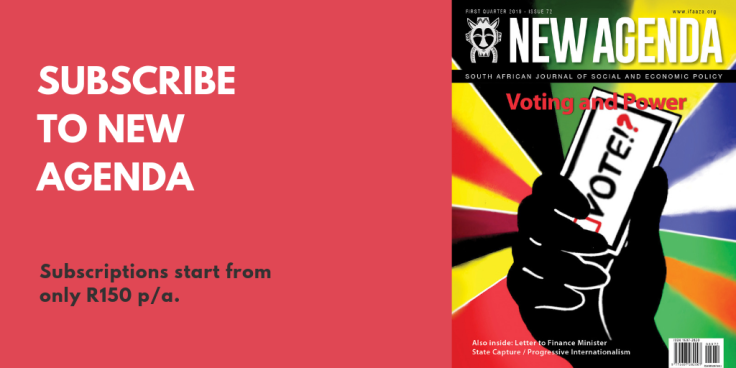 In his comments, Sanders is speaking to at least two different, but sometimes related, types of non-progressive internationalism which have contributed to the dire situation outlined above. The first is the so-called “Nationalist International”: the emergence of a network of right-wing leaders who simultaneously champion an ethno-nationalist political project in their own countries while supporting similar projects in others. Evidence of this is Steve Bannon’s trips around Europe in support of “The Movement”, a loose network of populist European leaders who emphasise “the importance of national sovereignty, stronger borders, greater limits on migration and fighting against so-called radical Islam” (Bravo et al., 2018).

The second is globalised capital under the neoliberal political project where, “Capital mobility, technology, supply chains, and other factors exacerbating the divide between rich and poor treat borders as mere afterthought” (Walzer et al., 2017). Globalisation has for decades allowed the free movement of capital across the globe, often to the detriment of the poorest people and weakest states. At the same time, the continuation of limits on the movement of people has trapped many in countries or regions unable to escape from extreme exploitation, poverty or violence. Desperation often causes them to risk extremely dangerous trips across oceans, rivers or deserts to escape these conditions. Soon the effects of climate change will make this situation even morestark as more and more climate refugees are added to the equation.

Varoufakis has also shown the links between the emergence of nationalist forces and the neoliberal project by talking about the “internationalism” being practiced by members of the financial community and the effects thereof:

“They have banded together to protect their individual interests – not the interests of the financial sector, but their individual interests – and that has shifted the burden of the crisis onto the shoulders of those who had never had organisational capacities beyond the limits of the nation state, and who very quickly became the victims of this cynical shifting of the burden of the bank’s losses, also known as austerity. That bred discontent, discontent bred a second wave of internationalism among the xenophobic, racist neo-fascistic right. Steve Bannon’s sojourn across Europe is just one example of how they are banding together and internationalising. So some of us have been arguing for a while that progressives must internationalise too. And we must juxtapose internationalism against globalism.” (Varoufakis, 2018)

South African politics is in no way immune the from the effects of rising ethno-nationalism and its international links. The trip last year to the US by the so-called Suidlanders in a concerted effort to drum up right wing US, European and Australian support for the imagined “white genocide” in the country shows the way in which such forces create international alliances while exploiting exclusionary and finite political identities (Gedye, 2018). These problems exist within the political mainstream as well. As we count down to the 2019 general election, the EFF, DA and ANC have all engaged in vulgar and dangerous campaigning that scapegoats “foreigners” for the country’s myriad socio-economic woes. Given the horrors of xenophobic violence we have experienced, there should be no tolerance for flirting with this.

In contrast to the spirit of the PI, some on the Left have also begun to succumb to an increasingly nativist, xenophobic and inward-looking politics that neatly, and incorrectly, distinguishes questions of domestic and international politics and continues to entrench categories of insider and outsider. One example of this is the splinter within the German left-wing party, Die Linke, where a group fashioning themselves as “realists” have argued against the long standing Die Linke commitment to open borders. Another example, is Angela Nagle’s article “The left case against Open Borders” published, ironically, in the conservative journal American Affairs.

These arguments make the case that the calls for “open borders” are merely “middle-class moralism” ignorant of the “economic realities” that “mean competition for badly paid jobs, precarity and atomisation” (Seymour, 2018). While some on the Left will resist couching their arguments in explicitly racist terms, rather invoking the interests of the working class, they in essence end up reinforcing right wing tropes and, crucially, playing into the hands of capital by dividing working class solidarities. They also lack empirical grounding.

One of the key arguments put forward by Nagle and others is that open borders will always increase competition for jobs thus driving down wages for the working class. However, the reality is much more complex.[2] In many cases, the existence of workers who are considered “illegal” actually serves to undercut wages as it creates an underclass of people willing to work for much lower pay and without the labour or other protections offered to those considered citizens or “legal” residents. As with other social struggles, the policy positions adopted in response may trigger vastly different outcomes. As Richard Seymour argues,

“There is no “open borders” independent of a wider policy mix. All free movement is conditional upon a wider policy framework. Which could be about suppressing wages, breaking up unions, intensifying competition and creating precarity at the bottom. In that case, those effects will fall most harshly on migrant workers, and ‘free movement’ will be conditioned and qualified in such a way as to enhance labour market segregation. Or, it could be about solidarity, maximum union rights, anti-precarity laws, collective bargaining, a high minimum wage which applies to all workers. The ‘pull factors’ will be radically different in each case, as will the overall class effects. Simply condemning a generic “open borders” position is simply saying very little of substance.” (Seymour, 2018)

Additionally, David Adler argues that while any impact of free movement “is concentrated among low-skill, low-education workers — the most vulnerable in the labour market… it is entirely unclear why the solution would be to restrict migration, rather than enforcing higher labour standards for all” (Adler, 2019).

Another argument put forward is that Left movements should campaign for domestic bread and butter issues before concerning themselves with problems of imperialism or the domestic struggles of workers in other countries. However, this assumes a strict binary between domestic and international that simply doesn’t exist. As Aziz Rana wrote recently about the history of this idea in the US,

“the problem was that bread-and-butter issues were not exclusively domestic. This was because the very nature of capitalism and of American imperial power fundamentally shaped the types of demands workers could make and the bargaining power that they enjoyed. What happened abroad had rippling effects at home that actually made working people less secure and more economically dependent. This meant that to focus on what corporations and states were doing locally, while ignoring how they operated around the globe, amounted to fighting only half of the battle. It also suggested that any politics of real opposition had to treat the foreign and the domestic as integrated.” (Rana, 2019)

In South Africa, the Left has at times also been reluctant to call out racism, xenophobia or nativism when practiced by parties claiming to be advancing a “left” agenda. Silence by many on the EFF’s invoking of an “Indian cabal” or comments about Malusi Gigaba’s nationality are examples. Such is the desperation to believe that a progressive political agenda is being put forward that many remain silent in the face of damning evidence to the contrary. Within universities there has also been a rapid growth in the popularity of the type of postcolonial and decolonial theory that questions universal values, emphasises difference and dismisses questions of redistribution as much less important than those of recognition. It is the failure of the Left in this country that many students equate Marxism with vulgar identitarianism.

There are undoubtedly policies that can be adopted at the local and national level in order to address the socio-economic and political concerns underpinning these developments: the curbing of illicit financial flows, increased state spending into productive industries, electoral reforms that make elected officials more accountable and give greater stake in governing to communities, among myriad others, should all be pursued. However, in order to build a more just global order, it is also crucial that we articulate our struggles within a framework of left internationalism. This is not only on moral grounds, of which there are many, but because it will prove impossible to fix the deep socio-economic and environmental problems we face without such a global, united perspective that takes politics beyond the boundaries of the nation state.

Nancy Fraser has written about how claims for justice, both redistributive and for recognition, “have typically been assumed to concern relations among fellow citizens, to be subject to debate within national publics, and to contemplate redress by national states” (Fraser, 2005: 69). She notes that this insulates a range of actors from critique and control. This includes, “more powerful predator states and transnational private powers, including foreign investors and creditors, international currency speculators, and transnational corporations. Also protected are the governance structures of the global economy, which set exploitative terms of interaction and then exempt them from democratic control” (Ibid: 78). The irony of the age of neoliberalism is that it presents itself as limiting the role of the state when, in reality, it is dependent on strong states that function to serve the interests of big capital. The limitations of narrow technical approaches to global warming, like carbon taxes, should show us the necessity of articulating our claims for justice as part of a global framework that allows us to address the political economy of the problems we face.

It is within this context that the launch of the Progressive International is so crucial. We need to begin seeing our problems as global ones. While the abolition of borders is unrealistic at this stage, we should ensure we commit ourselves to the principle of free movement of people. At the same time, we should leverage whatever national powers we may have while linking these to similar groups in other countries. We also need to ensure that international does not mean a transatlantic partnership between the US and Europe and perhaps South America. Given that the majority of the world’s population reside in Asia and Africa and given that many within this area have borne the brunt of global inequalities, it is imperative that they are part of any international project.  It is also imperative that their participation is not done on the basis of replacing global exploitative powers in the North with global exploitative powers in the South. Rather it must be done on the basis of building a truly just and equal order.

Adler, David. “Why Labour is dangerously foolish to turn against freedom of movement.” New Statesman (8 February 2019). Available at: https://www.newstatesman.com/politics/brexit/2019/02/why-labour-dangerously-foolish-turn-against-freedom-movement

[2] For an empirical study on the effects of free movement on wages in the EU see: https://migrationobservatory.ox.ac.uk/resources/briefings/the-labour-market-effects-of-immigration/