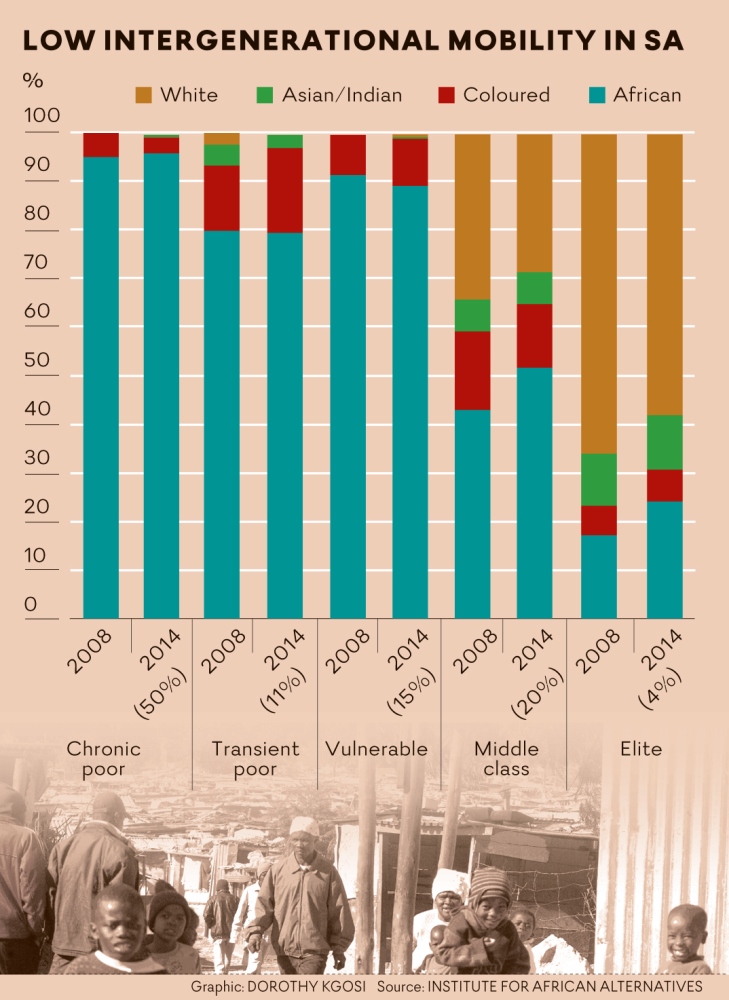 Overview of inequality in South Africa

Let us begin by highlighting some rather alarming statistics, many of which were presented at the recent IFAA “Confronting Inequality Conference”.

Millions of South Africans cannot afford to buy food and access healthcare, decent sanitation and other essentials of a dignified life. The DPE’s National Income Dynamics Study shows that 29% of the population are trapped in severe poverty. Moreover, in the past few years, 3 million people have joined the ranks of the impoverished. The problem is particularly acute in rural areas. Four fifths of the rural population live below the poverty line. This is almost double the rate of poverty in the metros. However, in urban areas too, many face spatial segregation from productive economic activity.

Worryingly, the economy suffers from precarious mobility, with those escaping poverty having low probabilities of remaining out of it for long. In addition, we are seeing a lack of intergenerational mobility, with 95% chance of children born to parents in the bottom of earnings distribution occupying the same place in the distribution. The entrenched and racialised class stratification of South Africa, showed in the image below, reveals only 24% of the population are free from poverty or the threat of it.

Most of the research on inequality in South Africa has focused on income differentials. However, the story is even worse when we consider our limited knowledge on wealth. A recent paper by Anna Orthofer finds that wealth is much more unequally distributed than incomes. According to Orthofer, 10% of the population own 90-95% of all South Africa’s wealth. With a Gini coefficient of about 0.95 (compared to 0.7 for incomes, the highest in the world), “the South African wealth distribution is as unequal as that of the world as a whole” (Orthofer, 2016). Wealth, moreover, generates its own income (interest, dividends, rents and capital gains), and so further deepens long-term inequality.

One should not only have moral concerns about these figures. There are pragmatic reasons to be alarmed too. Research indicates that inequality causes violence in societies where prosperity is divided on racial, religious or regional grounds. The racial character of South Africa’s inequality is due to its history of colonialism and apartheid, and poverty and wealth largely continues to wear black and white masks respectively.  We need to find a democratic, progressive solution urgently less we sink even further into social and political unrest.

It is in this context that IFAA convened the “Confronting Inequality Conference” funded by the Netherlands embassy. Those in attendance included students, academics, NGO’s, government officials, labour, the embassies of the Sweden, Norway and France, and civil society. The audience grappled with how to realise greater equality given the rather alarming statistics presented by panelists throughout the day. Some of the more salient points discussed are mentioned below.

It is clear that poverty is driven by unemployment. Yet the latter is also the creation of inequality, where the unequal distribution of access among the population frustrates the economy’s ability to absorb the marginalized into productive activity. Contrary to the views of more conservative economists, there need not be a trade-off between fighting unemployment, growth and inequality. Achieving greater equality would lead to an increase in aggregate demand, a rise in productivity (as more working age people gain access to education), a broadening of the tax base  and lower the risk of a credit induced financial crisis (Massie, 2017).

Some progress has been made in addressing wage inequality, with the country’s social partners- labour, business, civil society and government- agreeing to a national minimum wage of R20 an hour by May 2018 (Massie, 2017).  A minimum wage however, is not enough. Other policies that should be explored include the public disclosure of pay ratios within business or sectors, caps on executive pay, a shift of corporate governance away from shareholder primacy and towards workers participation, government incentives and penalties applied to pay ratios and the strengthening of the collective bargaining process (Massie, 2017).

Other solutions to inequality canvassed at the conference included free education, ambitious land reform, and the creation of a coherent spatial policy – regional, rural, urban.  On the latter issue, Prof Ivan Turok pointed out that the working poor, as a consequence of apartheid geography, spend a disproportionate amount of their monthly income on transport. South Africa has one of the longest commuting distances in the world.  Prof Turok illustrated the relationship between spatial inequality and social inequality and the impact this has on human, social and economic development. The spatial divisions that characterise South Africa’s built environment reflect inclusion and cohesion on the one side and crime and instability on the other. He noted that segregated and fragmented settlements also undermine productivity and growth and government policies play a big role in sustaining spatial inequalities.

A further dimension that does not often receive enough attention is what Pahli Lehohla, Statistician General of StatsSA, called the Demographic Dividend. This refers to the change in age distribution of the population over time. A decline in the proportion of older people relative to the youthful population presents an economic ‘windfall’ if the productive forces of the country are geared to meet this change. Minister Lehohla  explained that in the Nordic countries economic policy was aligned with this demographic phenomenon over a period of 60 years while in China it has been undertaken over a period of 30 years. However, since South African policy is failing in this regard and the country is not doing well in productivity, labour absorption or terms of trade, unemployment has become a huge driver of poverty and, consequently, of inequality.

The problem is structural

For all the palliative solutions offered up, inequality in South Africa will only be comprehensively addressed if structural constraints are confronted. As Neva Makgetla argued, the South African economy remains reliant on commodity exports and capital-intensive industries. Financialisation is bloating the financial sector to a size wholly inappropriate for a developing country with high rates of joblessness and poverty. Added to this is a political economy dynamic in which historically entrenched interests, along with newly formed interests attached to narrow black economic empowerment, have too great an influence over the levers of macroeconomic policy.

Deliberate and progressive state intervention is needed in order to achieve the changes necessary for fundamental transformation. Yet in order for this to occur it is first necessary to give up on mainstream myths. Despite the overwhelming evidence to the contrary, and concessions by the IMF, World Bank, South African macroeconomic thinking continues to be mired in neoliberal orthodoxy. Yet as several speakers at our conference highlighted, the era of “trickle-down economics,” faith in the Kuznets curve, and the belief that inequality is good (or at least neutral) for growth, is over. Although certain government departments champion industrial policy and the ideal of a developmental state, it is time that all sectors of our society- including business- embrace a transformative agenda.

A strong sentiment emerging from the conference was that these ambitions would only be realise if progressive forces in the country unite to pressure key stakeholders into taking action. Participants and presenters highlighted the urgency of empowering communities, labour and civil society for participatory democracy in economic management. Crucial to this might be to have direct worker participation in company boards, as is the case in Sweden and Germany. These initiatives are supported by economists Thomas Piketty and Ha-Joon Chang who have called into the question the “expert culture” surrounding economics and economic policy formulation. Participants also discussed how social democracy might look like in South Africa.

A necessary aspect of community and social empowerment in South Africa is challenging the corruption and state capture that plagues our democratic institutions and state-owned enterprises. Kgalema Motlanthe, in his opening address to the conference said that any interventions that seek to address inequality cannot ignore the reality of “nepotistic relations and tainted business relations” that undermine the ability of the state to meet its social responsibilities.

Ultimately, the “IFAA Confronting Inequality” conference attempted to outline a research and social agenda for addressing inequality in South Africa. Much ground still needs to be covered. The conference, for example, did not talk about the international causes of South Africa’s inequality- e.g. global financialisation and commodity price fluctuations. It was also strongly suggested that South African social scientists place the question of wealth, sorely neglected in the literature, in the forefront of their research programs. The conference highlighted the importance of participatory democracy and the urgent need for progressive social forces to unite given the current political and economic crisis. “Confronting Inequality” presents us with one such avenue to do just that.

One thought on ““Confronting Inequality”: A report on IFAA Conference”